So as of typing this, it's 3rd August 2019 and the website is finally in a somewhat finished state. Yeah, FINALLY. Looks like I can get rid of those under construction gifs everybody loves so much. Who knew I'd still be working on this stupid site years afterwards? It's been so long I genuinely forget how long this site's been around for. My guess would be around four years. Now I feel old...

But enough from me, how about a recap of the whole thing?

So, in around late 2015 I first registered the site, because I thought it would be cool to have my very own site. It had a black background and green text, which was sort of cool, but it was barely a website. I don't have an exact picture of what it looks like, but perhaps it's better that way, because the paragraph I left there was embarrasing. It was just edgy and the fact that over 6000 people saw that version of the site makes me cringe. On top of that I was so lazy that the paragraph wasn't even finished. While I may not have an exact picture of the site, I do have a picture showing the layout. 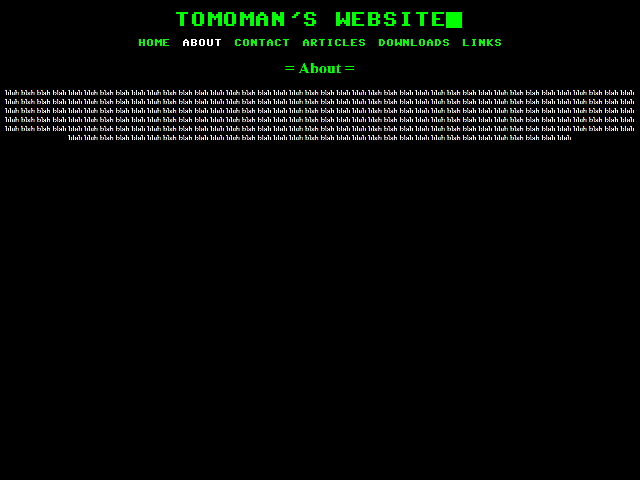 In around August 2017, I wanted to redesign the site. I was a lot more optimistic when I was typing stuff in for it. Maybe a bit too optimistic. The end result is similar to the version you're seeing now. I also made the computers page around the same time. So yeah, my first page was made two years before the site was even done. I didn't bother updating the actual domain since it still wasn't done. The old shitty one hung around for awhile longer.

In 2018 I don't think I actually did anything. I guess I was too distracted with other stuff.

In late 2019, I realised my old embarrasing version of the site was still there for the world to see. I made sure to change that. A little while later I got my shit together and now I'm finally finishing this off.

So why did take so long to finish the site? It's simply because I got distracted and went on to do other stuff. Yeah, it's as simple as that. Also, here's a little fun fact. The term for abandoning a site prematurely is called code & run. But hey, at least it's actually done now. Enjoy it before I forget about it for another year! I'm only joking of course, I'm looking forward to continuing work on the site. I will probably start by making look a bit more appealing. Or at least as appealing my HTML skills can make it.